14 March was a special day as Northern Ireland Assembly members made a pledge to support BSL / ISL. 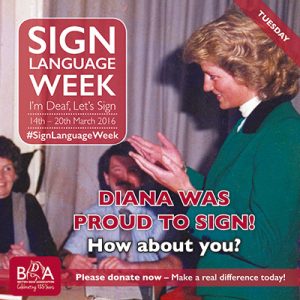 A lot of people are unaware that Diana, Princess of Wales, proudly used British Sign Language when she was the BDA’s Royal Patron. 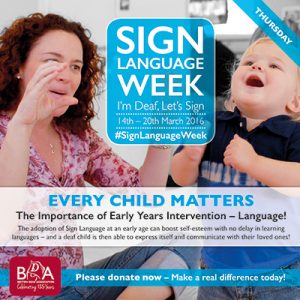 We asked you to join us as we call for major investment in an Early Years Intervention programme that would allow deaf children to be bi-lingually taught from an early age to boost self-esteem in learning languages.
We want their families to learn too and be able to provide a happier family environment with full communication.
To donate in support of the BDA’s Sign Language Projects, making a real difference to families, their deaf children and young people – http://bit.ly/Donate-2-BDA

THIRTEEN YEARS ON, WE ARE STILL WAITING… PARLIAMENT MAY HAVE FORGETTEN, WE HAVEN’T!

It is 13 years since the Government recognised BSL as a language in its own right. They promised at the time to consider a legal status for BSL.
151,000 BSL users in the UK are still waiting for our language to have the same rights as Welsh, Gaelic and even Cornish! We need a BSL Act! 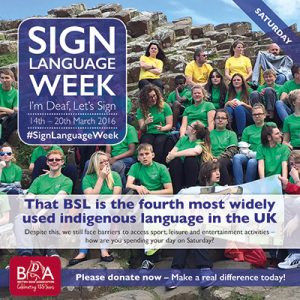 Saturdays are for sports, leisure, arts and entertainments, but do we have access to BSL support to be able to enjoy them? The BDA runs the Deaf Roots and Pride UK project supporting deaf children, young people and older people, providing mentors to visit and support them to be more active in their local communities.

FAMILY SIGNS AT HOME, ALL INCLUSIVE!

Sunday is Family day. In Northern Ireland, the BDA provides Family Signs at Home, a very successful project in which families can learn Sign Language together at home.

Some of the best tweets

#SignLanguageWeek was never more exciting, with a British Sign Language (Scotland) Act to deliver. Now that’s what I call #BSLEnlightenment!

Last week we celebrated our first anniversary of signing the Deaf Charter. This week, we support #SignLanguageWeek https://t.co/Zy5X8OLDbf

Today we recognise the need for British Sign Language and the importance of access for information via BSL. #SignLanguageWeek